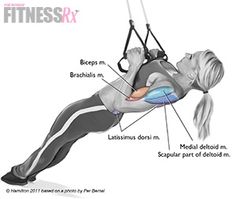 Do Your Hips Really Need to Be Fully Extended During the TRX Row?

The TRX Row is a phenomenal drill.

But I’m not going to waste your time explaining why.

You already know why it’s a great drill and that it can be used across numerous populations ranging from beginner all the way to advanced trainees.

The last thing we need is to repeat that same message for the 27,000th time.

So What’s This Article About?

Have you ever heard that when performing the TRX Row you need to keep your hips fully extended?

Of course you have.

Unless you’ve been living under a rock, odds are you’ve heard that a hips flexed position during the TRX Row is indisputably wrong. 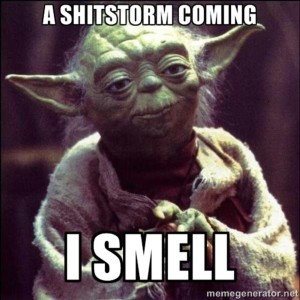 Before you get pissed and write me off as a charlatan, hear me out:

First: Fully extending the hips during the TRX Row is not wrong. In fact, when first teaching the TRX Row I always begin by coaching a hips extended position.

Second: Just because it’s not “wrong” doesn’t mean it’s always “right.” Just as I use the hips extended position in a variety of situations, there are many instances in which a hips flexed position is the better choice.

Want to See What I Mean?

In the brief video below I explain exactly why and when a hips flexed position is better than a hips extended position during the TRX Row.

Beginners and Weaker Trainees do better with a hips extended position as their torso is at a greater angle relative to the floor which allows for optimal scapular positioning (watch starting at 1:05).

Intermediate to Advanced Lifters may do better with a hips flexed position as it will facilitate optimal shoulder & scapular positioning while simultaneously increasing the difficulty of the movement (watch starting at 1:41).

What About Glute “Activation?”

Many coaches say the hips extended position is vitally important as it teaches the client to “activate” their glutes and achieve adequate hip extension.

And that sounds cool and all…

But it’s completely irrelevant during the TRX Row.

1) The goal of the TRX Row is to improve upper back muscular strength, endurance, posture and other related components.

Not to improve glute activation

Not to teach hip extension

Not to do anything other than improve upper back muscular strength, endurance, posture and other related components.

2) Glute “activation” and hip extension can (and should) be taught during other times throughout the training session.

This is just common sense.

The TRX Row is not the time to be focusing on minutiae such as hip position and glute “activation” when those things can be emphasized in so many other areas of the program like…oh, I don’t know…maybe the lower body portion?

I mean, call me crazy, but I always thought Kettlebell Deadlift’s were a great tool teach hip extension and glute activation….

Or, for the more advanced trainee, maybe even Single-Leg RDL’s….

Or what about that thing called a Conventional Deadlift?

The simple fact of the matter is that a good training program is going to emphasize hip extension and glute “activation” over and over again. So trying to force it during the TRX Row – when the main goal is upper back strength, endurance, etc – is a waste of time and effort.

1) There is no “right” or “wrong.” Both hips extended and hips flexed are valid positions in which to perform the TRX Row. Just remember that the “best” position is dictated on an individual basis by skill level, anthropemetry, strength, goals, etc.

2) If you’re concerned with glute “activation” and full hip extension during the TRX Row then you’re missing the forest for the trees.

The TRX Row is truly a phenomenal full body exercise but don’t forget it’s main role is to improve muscular strength, endurance, posture and other related components in the upper back. 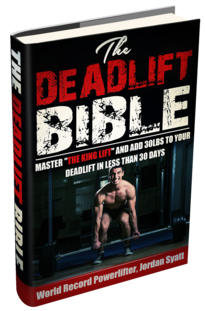 Downloaded and read by thousands of lifters, The Deadlift Bible is my own creation complete with 4 instructional video tutorials and an entire training manual outlining optimal deadlift technique, progressions, programming, and more.