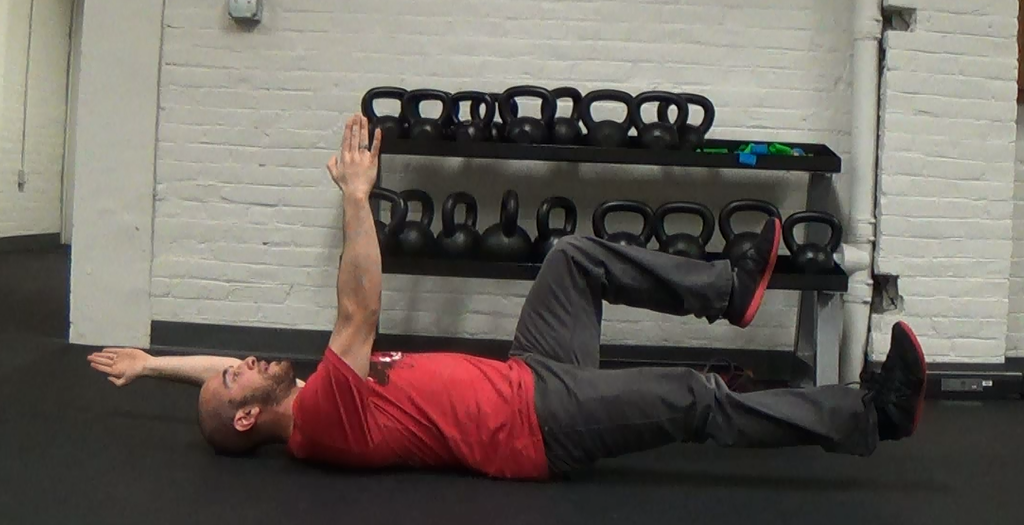 The Deadbug: 2 Common Technique Errors (And How to Fix Them!)

I remember, years ago, the first time I saw a colleague doing a set of Deadbugs I thought they were practicing a secondary version of the Hitler march in the middle of the coaching facility.

After I inquired about his recent venture into the Hitler youth he told me to shut-up and try the Deadbug out for myself.

“It’s not as easy as it looks!” he gasped after finishing his set.

So I gave it a go. And I immediately regretted making fun of him.

What looked like an elementary and extremely easy drill lit my abs up like a Christmas tree and had me shaking on the floor.

After a set of 10 slow and controlled reps I splayed myself out on the turf beneath me and apologized profusely.

“The Deadbug is freakin’ brutal, man! That’s no joke!“

Ever since then I’ve incorporated the Deadbug and all of its variations into my training programs for both myself and my clients and I can honestly say it’s arguably the single best abdominal strengthening exercise I’ve ever used.

Unfortunately, most lifters and coaches completely botch the technique and subsequently get little-to-no benefit out of the Deadbug.

To put an end to the confusion I’ve created the brief Deadbug instructional video below in which I outline 2 common technique errors and how to fix them.

Just in case you chose to skim or skip the video entirely, below I’ve outlined a summary of both common Deadbug technique errors. 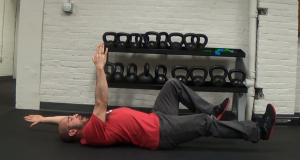 The main purpose of the Deadbug is to improve anterior core stability.

However, when you slip into excessive lumbar hyperextension (that’s the huge arch in my lower back in the picture above) you automatically negate any and all benefits of the Deadbug as you’re no longer using your abdominals.

See, in the Deadbug the abdominals function to resist lumbar hyperextension. So when you relax your abdominals and allow yourself to slip into a hyper lordosis you’re essentially just hangin’ out on the floor making odd and possibly offensive gesticulations to passerby.

How Do You Fix This?

Shove your lower back into the floor as hard as humanly possible.

If I were to try and stick my hand underneath your lower back while performing the Deadbug I shouldn’t be able to because you’re pressing it so damn hard against the floor.

What If You Can’t Resist Lumbar Hyperextension?

You aren’t strong enough to do the Deadbug correctly and need to find a suitable regression.

As a frame of reference, here’s a video of me performing a set of Reverse Crunches. To make this variation easier just keep the knees tucked in closer to your chest. 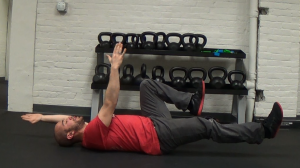 When performing the Deadbug you don’t want your flexed leg to go past 90-degrees of hip flexion.

In the picture above you can see I’m demonstrating incorrect technique with my left leg in excessive hip flexion.

In the picture below I’m demonstrating proper technique with my left leg in the right amount of hip flexion. 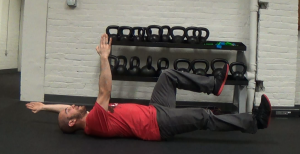 Without going into excruciating detail, flexing the hip past 90-degrees makes the movement drastically easier by reducing how much work the abdominals are required to do.

So when training the Deadbug it’s important keep your flexed knee directly above (or even slightly in front of) the hip on the same side.

How Do You Fix This?

If you keep flexing your knee past 90-degrees ask a partner to physically block your knees with her/his hands on every rep.

Train using this strategy until you learn the correct movement and can do it without a “spotter.” 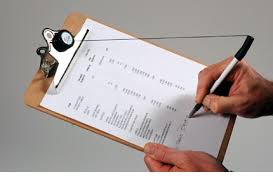 Sets & Reps: 2-4 sets of 6-12 total repetitions per set is sufficient to accomplish the desired training adaptations.

Bullet Proof Your Body with The Deadlift Bible (FREE!) 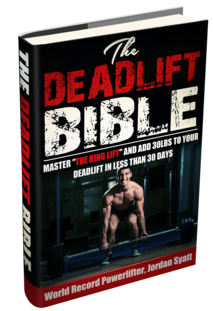 Downloaded and read by thousands of lifters and coaches, The Deadlift Bible is my own creation complete with 4 instructional video tutorials and an entire manual outlining optimal deadlift technique, progressions, programming, and more.