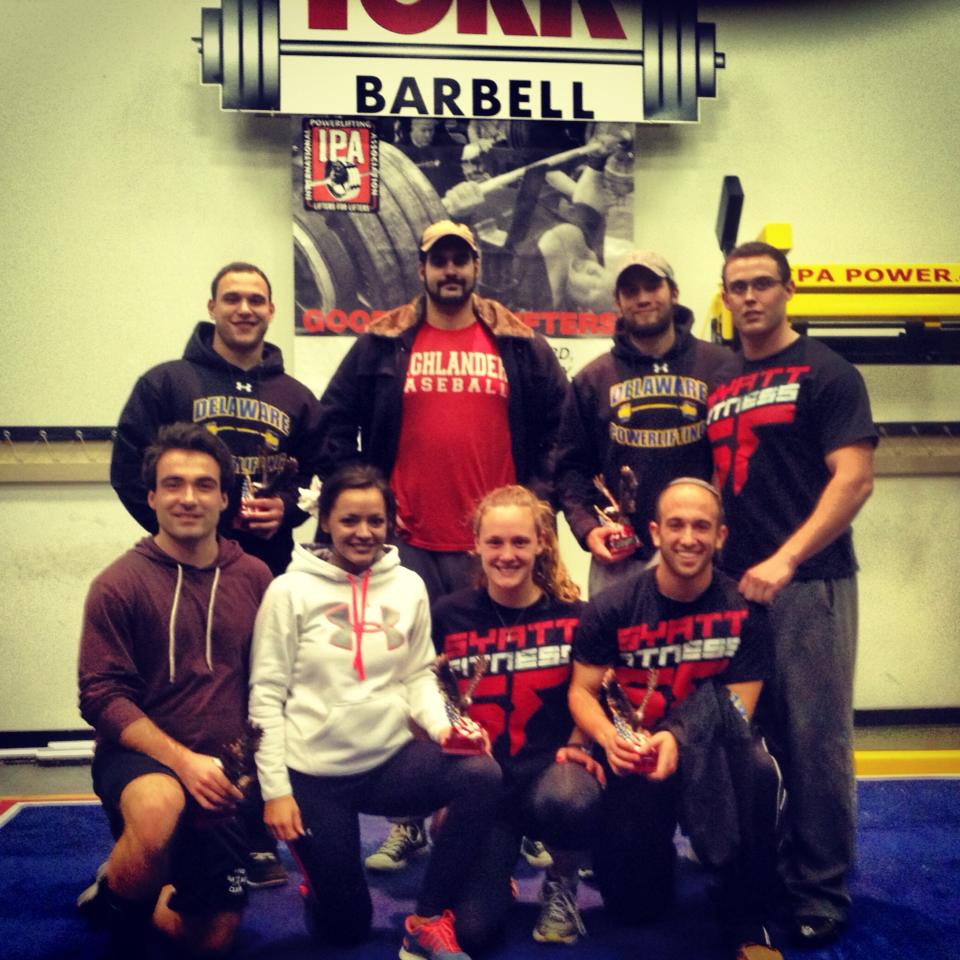 The UDel Powerlifting Team is back at it again lifting bigger and better than ever before!

This past weekend 7 members of the team (including myself) traveled to York Pennsylvania to compete in the IPA National Powerlifting Championships.

As you may recall, last year we competed in the same competition and everyone had extraordinary performances. Well, this year proved to be no different as every single lifter shattered their old personal records!

To give you an idea of how much we’ve all improved, check out the average team improvement for each lift:

*Several lifters are new to the team and did not compete last year. In those cases, the average improvements are taken from their initial 1RM’s.

Needless to say, those improvements are pretty damn awesome especially considering most of the lifters are well into the intermediate & advanced categories.

Before I introduce each individual lifter, I want to take a moment to thank the team as a whole. Having co-created the team nearly 4 years ago, this was a particularly nostalgic experience as it was my last competition with The UD Powerlifting Team. I can say without a shadow of a doubt that this team quite literally saved my life and provided me with the opportunity to meet some of the most amazing people – now my family – in the world.

Thank you all so much. You have given me more than you will ever know and I will forever be grateful for your friendship, support, and love.

With that said, let’s meet the lifters! 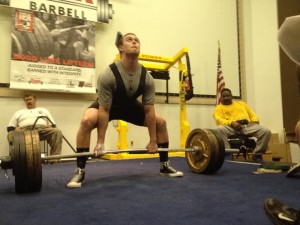 Ryan is a freak of nature…and I mean that in a great way.

Unquestionably the most explosive guy I’ve ever met, Ryan had an incredible day, breaking PR after PR and he even set a new Junior World Record in the 198lbs weight class with a 630lbs Deadlift

He also made a bold jump to try and hit a 360lbs Bench Press (in order to beat Chaz) but just missed at lockout. It was an awesome attempt! You can watch it right HERE.

Congratulations, Ryan. Not only are you a great lifter but you’re well on your way to becoming an even better coach! 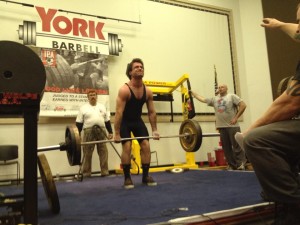 Anthony is the newest member of the team and my god I love him!

One of the nicest and most generous people I’ve ever had the honor of meeting, Anthony is an eager learner and comes to practice every single day with the intention of improving.

And boy did he improve fast!

Having trained with a barbell for only 2 months, Anthony came to the competition and absolutely rocked it! Despite missing his first lift of the day, Anthony went 7 for 9 and increased his total by more than 250lbs!!!

I’ll say that again: Anthony increased his total by more than 250lbs in a mere 2 months of weight training! 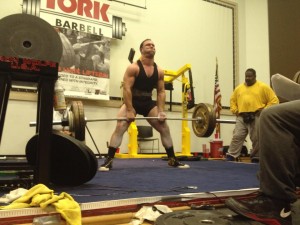 Chaz is a beast.

Well, that much is obvious from looking at his picture but, seriously, the dude is an animal.

Aside from increasing his total by 120lbs, the most impressive part of Chaz’s transformation is that he had surgery this past May.

Chaz actually developed a hernia and couldn’t lift for the entire summer prior to this school year. That means that despite taking 3 months away from lifting anything heavier than a fork, Chaz still managed to make truly extraordinary gains.

Arguably the best part of Chaz’s day was his 500lbs Deadlift attempt. He was SO close (literally inches away) and I would put money on him hitting that weight when he’s fresh. Take a look at the attempt HERE.

Want to keep up with Chaz? Check out his website www.malewskimade.com. 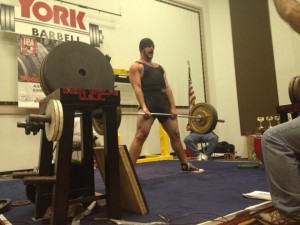 Over the last year Kev really came into his own.

Aside from his stellar performance at the meet (which I’ll review below) his attitude and work ethic during practice is what truly sets him apart. Unquestionably one of the kindest people I’ve ever met, Kev is constantly coaching, cueing, and helping the other lifters. Having joined the team over 2 years ago, Kev has grown tremendously during his time on the team and continues to impress me each and every day.

In regard to his performance, well, the numbers speak for themselves. Increasing his total by 170lbs in the last year alone, Kev’s progress is testament to his hard work. Best of all, Kev really learned how to “have fun” at this competition. No matter what anyone did there was nothing that could wipe the smile off of his face – even as he walked up to the bar for his attempts – for the duration of the competition. 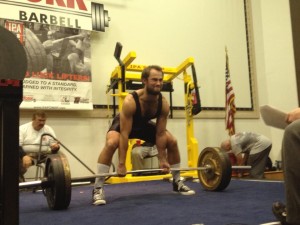 Not only does he have a beard to rival that of Abe Lincoln’s, but he’s also one of the most determined individual’s I’ve ever met. The kind of person who will always give 100% effort regardless of the activity, Cody has made drastic improvements since his first meet last March.

While the numbers show that he improved by 70lbs (which is honestly amazing), Cody chose to “go for broke” on a couple of his final attempts which included a 500lbs Deadlift missed just above the knees. As a result, the numbers don’t tell the whole story as Cody was capable of lifting far more than he actually did. Regardless, he had a stellar performance and I can’t wait to see how he improves over the coming year. 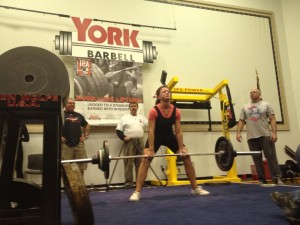 Click the links to watch videos of her best lifts!

Ashley competed in her first competition this past June and was wicked excited for the IPA Nationals. While she wasn’t happy with her overall performance, I couldn’t be more proud of her.

She took her opening Squat of 165lbs ATG and blew it up like speed work. For her next two attempts she took 175lbs but failed both times several inches out of the hole. Now, someone who doesn’t know her might think this is a strength issue but, having seen her hit 175 with ease in the gym, I knew it had nothing to do with strength.

Ashley is an extraordinarily strong girl both in mind and body. This competition, however, can be particularly nerve racking for even the best of lifters. Plain and simple, missing her last two squat attempts came down to nerves. That’s it. What’s great about Ashley, though, is that she was able to come back and absolutely destroy her Bench and Deadlift records!

Beating both by more than 20lbs (in just over 4 months of training), Ashley could not have done any better. What was even more amazing, though, is that she just missed a 230lbs Deadlift about 2inches away from lockout. She grinded through the whole lift for 18-seconds until the judge had to tell her to put the bar down. See the lift for yourself right HERE.

Click the links to watch videos of my best lifts!

As for me, I’m very happy with my performance.

Having went 9/10 on the day with several personal records, 3 world records, and my first Elite total…I have nothing to complain about. It was just a great day.

It’s impossible to compare my results from last year to my numbers from this year as last year I competed in gear whereas this year I competed RAW. That being the case, the before numbers listed above were my previous RAW max’s that I had tested throughout the previous semester.

Looking back, I’m particularly excited to see that my current RAW Bench is equivalent to my geared Bench of last year. Granted, I suck at using a bench shirt but, considering my Bench has always been my weakest lift, it was great to see such drastic improvements.

Additionally, my geared Deadlift last year maxed at 420lbs while this year (RAW) I hit 485lbs. I’d note, I hate Deadlifting in gear and always thought the suit hindered my performance so perhaps this was just the proof in the pudding.

All in all, I’m stoked. It was a great day, fantastic performance, and I was surrounded by my best friends in the world.

It doesn’t get much better than that.

Following my graduation this December, Chaz and Hannah will be taking charge of The UD Powerlifting Team as co-presidents. While the team has been my “baby” for the last few years, Chaz and Hannah are two of the strongest, kindest, and most knowledgeable people I know and will unquestionably step up as incredible coaches.

I couldn’t be any happier with my decision to leave the team under their guidance.

I have no idea!

I have 3 more weeks in University (when the hell did that happen!?) and when I’m done I’ll be heading up to Boston to start working full time at an amazing facility called Total Performance Sports.

Other than working at TPS and continuing to develop Syatt Fitness, I have absolutely zero clue what’s going to happen next. I know that’s not the most professional thing to say but, hey, I’m 22 years old and plan on having a lot more fun on this little adventure we call “life.”

Rest assured, there will be lots of laughing, travelling, heavy lifting, and copious amounts of beer along the way.