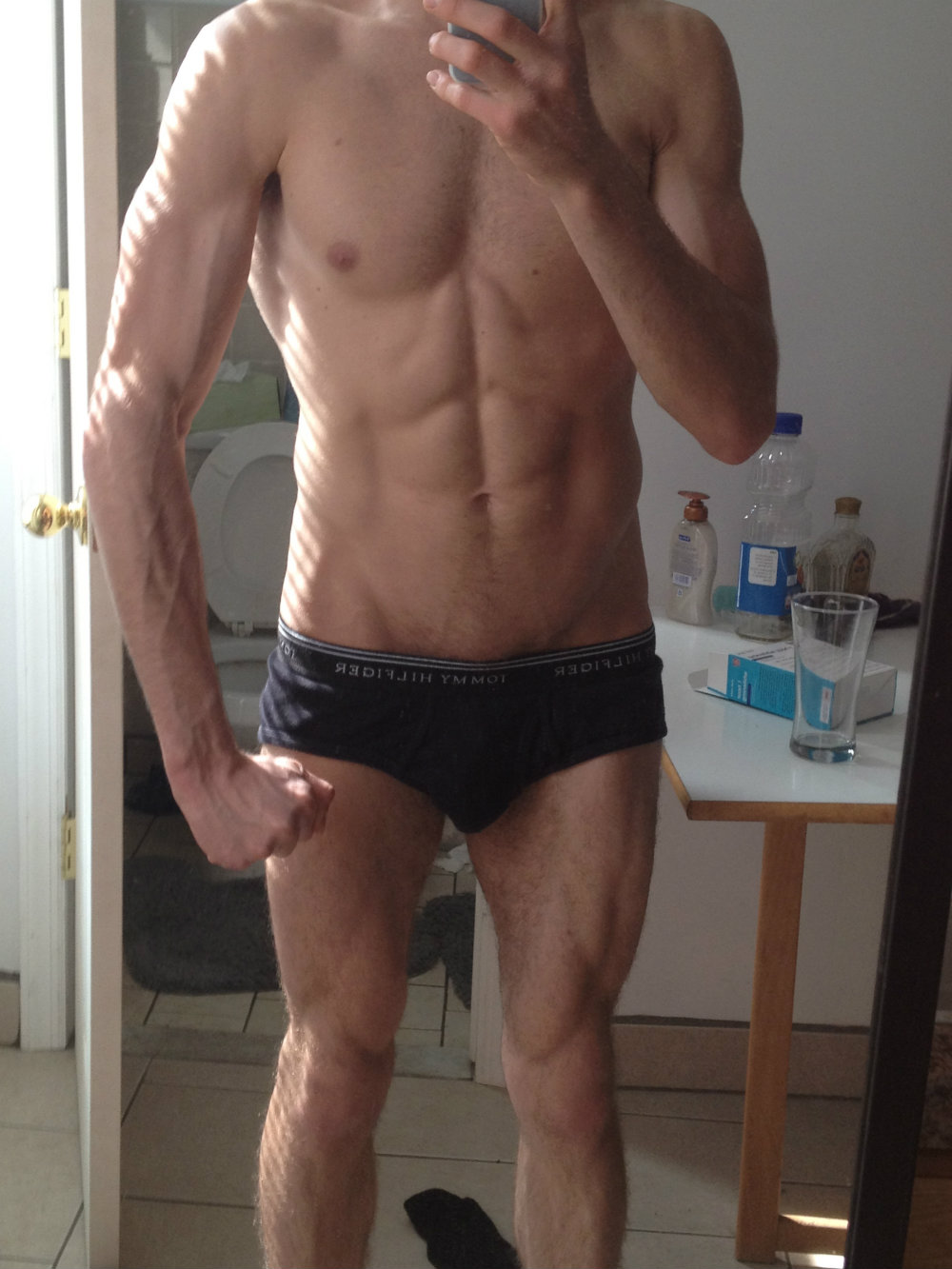 As you know from my previous client success stories, I’m extraordinarily proud of each and every one of my clients. They all put in a truly incredible amount of effort to achieve their goals and, quite honestly, make my job very easy.

Well, this client was no different and he not only achieved his ultimate goal but he overcame numerous barriers along the way.

It is my distinct pleasure to introduce Mark:

Mark is in his early 20’s and is an exceptionally talented rising actor/model. As one might assume, the nature of Mark’s job requires him to maintain a lean physique year round. If he is called in for an audition or photo shoot and isn’t in top shape then he wont get paid – period.

When Mark came to me he was already very lean (my estimate is somewhere between 8-9%), but he needed some guidance while losing those last few percents and, more importantly, maintaining that level of leanness.

Mark was a unique client in that he already had his training and nutrition dialed in. He knew how to track his calories and macronutrients, he knew the benefits of certain foods over others, and he was proficient (and strong) in all of the basic compound lifts.

The majority of guidance which I gave to Mark was not more knowledge pertaining to training and nutrition, rather it was generally in regard to the psychological components of dieting.

As a quick aside, through the help of mentors such as Mark Young and Dr. John Berardi, I’ve come to realize that the psychological components of dieting (and fitness in general) are perhaps the most under appreciated albeit utterly essential elements of successful coaching.

Anywho, as anyone who has ever dieted down to extreme levels of leanness will attest to, it is rarely an easy or comfortable task. In fact, often times it can become an extreme burden mentally, physically, and emotionally.

However, through speaking with Mark and keeping track of his dieting patterns, him and I were able to focus in, find the central issue, and work together to overcome some of his unhealthy relationships with food.

To give you some insight into Mark’s training and nutrition, I’ve outlined his basic programming below:

Mark’s impeccable nutrition was what allowed him to reach this truly insane level of leanness. While he didn’t routinely track his calorie and protein intake, he had [meticulously] done it in the past and had a very good idea of how much he was eating on a daily basis.

Generally, Mark mostly ate a diet that closely resembled the Paleo principles. While he certainly wasn’t a Paelo fanatic, he recognized and understood the importance of a whole food and high protein diet long before he began working with me.

As Mark’s work schedule was highly unpredictable, his training was not as regimented as I would have liked. Regardless, he ended up weight training about 2-4 times per week and doing some form of cardio every day. I think it’s important to note that Mark really enjoyed aerobic activity and, since he lived in a big city, he easily walked over 60 minutes on any given day.

Well, there isn’t much else to say except…Congratulations, Mark!

Your hard work and dedication has been beyond inspirational and I am truly honored to have had the opportunity to work with you. You are not only an amazing client but you’re an incredible friend. I look forward to continuing our work together and can’t possibly express how excited I am to see your success in the near future.

I can’t recommend working with Jordan highly enough. Without his guidance and knowledge there is absolutely no way that I would have achieved the condition that I did. I worked with Jordan over the span of several months and I was prepared to have to work hard to get as lean as I wanted to be.

What separates Jordan from other online coaches is that Jordan truly cared about my results. Jordan was concerned for my well-being and emotional state while I was dieting. He made it clear, that if I was ever close to breaking my diet or was losing motivation to call him and we would work it out. I took him up on this offer on several occasions. I wont lie, getting as lean as I did wasn’t always enjoyable, but I always knew that I would be able to achieve my goals with Jordan’s help.

After completing my diet, Jordan and I stayed in touch and he has helped me tremendously in maintaining a condition that I am extremely happy with. He helped me break the extremely exhausting pattern that I had of bingeing and then over dieting to compensate.

In summation, during my time working with Jordan I achieved the best condition of my life and was able to maintain a level of leanness that I am very happy with. Additionally, he helped me overcome binge eating. Which is fucking exhausting to be honest. I should also mention that I told Jordan that I wasn’t prepared to give up drinking during my diet. He made this possible through simple tweaks and and modifications within my diet. Granted, I wasn’t consistently getting blasted, but I was able to enjoy myself without feeling deprived or like a social outcast.