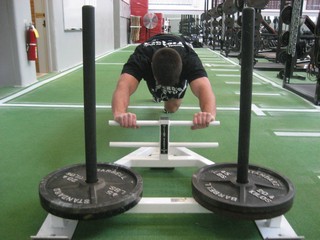 by Jordan Syatt February 15, 2014
The Prowler: One of my favorite quad exercises

My quads are wrecked.

I woke up this morning, having forgotten about yesterday’s training session, only to be painfully reminded of it with each and every step.

Over the past few month’s I’ve recognized my quads as a major weakness – both in size and strength – so I’ve spent a considerable amount of time and effort giving them the attention they deserve.

Fortunately, I’ve seen dramatic carryover to my squat. I haven’t noticed much change (positive or negative) in my Deadlift, so eventually I’ll have to include more hamstring-dominant movements as well. For now, though, I’m content focusing on my squat while maintaining my Deadlift.

To give you some insight, some of my favorite quad-dominant exercises have been:

I’m always looking for new movements so if you have any suggestions just drop them in the comments section at the end.

Now I’ve gotta get going (lot’s of coaching to do over at TPS) but I hope you enjoy this isntallment of The Week in Review and have a phenomenal weekend.

Training to Failure: 5 Questions You Need to Answer

When warming up with lighter weights, don’t screw around. Take your warm-ups seriously. Hammer home perfect technique and try to move the bar as quickly and explosively as possible. These warm-up sets set the tone for your work sets.

During your heavy work sets, don’t let the weight scare you. Regardless of the weight being used, try to maintain the exact same technique, attitude, and state of arousal. If you let the weight get to your head, everything will change and performance will suffer.

Tuesday’s Strength Lesson: The Glute-Ham Raise (GHR) is one of the key movements that has helped to drastically improve my Deadlift. Most interesting is that every time my GHR improves, my Deadlift improves as well.

Performed correctly, this movement is bar-none one of the best drills for nearly *every* lifter.

Because of its relatively difficulty, though, many trainee’s do them incorrectly and/or neglect them all together.

To help improve your GHR (and, in turn, hopefully your Deadlift), I’ve laid out 6 of the best Glute-Ham Raise progressions in the article linked below

> 6 of the BEST Glute-Ham Raise Progressions  <

Regardless of where you fall on the trainee continuum (beginner, intermediate, or advanced) there are progressions that will challenge you beyond belief and drastically help to improve your overall strength and performance.

Give this a shot:

Conditioning: Work for 20sec, Rest for 30sec. Repeat for a total of 2-4 rounds depending on current level of conditioning.

Thursday’s Strength Lesson: There is no such thing as an explosive exercise. Rather, an exercise only has the *potential* to be performed explosively (or not) by the lifter.

For this reason, I’m not a fan of training the Olympic Lifts with anyone other than Olympic Lifters.

Some coaches argue that no exercises build explosive power better than the Olympic Lifts.

I suggest that building explosive power depends almost entirely on how the lifter performs the movement – not which movement she/he performs.

To illustrate, if an individual with terrible snatch technique tries to snatch…it will hardly be explosive as they’ll be more focused on completing the lift without getting injured – often times slowing things down on purpose.

Conversely, a Deadlift is markedly simpler compared to the snatch and can be performed just as explosively so long as the lifter actively tries to do so. In this case, I suggest that speed Deadlifts are just (if not more) effective at building explosive power than the Olympic Lifts.

Want to try one of my favorite drills for improving speed and explosive power?

Try the Band Resisted Kettlebell Swings outlined in this video!

Friday’s Strength Lesson: “A woodpecker can peck 1000 trees 20 times and only get tired.

The woodpecker has a goal. His goal is to get dinner. If he wants to achieve that goal he will need to focus on one tree to get the job done. He can’t jump from tree to tree to tree and expect to get results.”